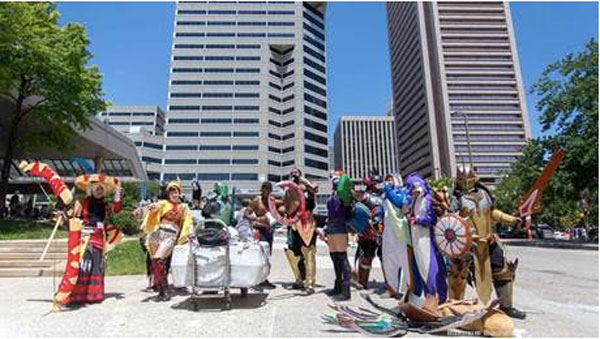 People passing through downtown near the Walter E. Washington Convention Center this weekend may be doing double takes, as thousands of costumed attendees of Japanese anime and culture conference Otakon descend on the city.

It’s the first year in D.C. for the conference, which the District lured away from Baltimore after it had been held there for 18 years. It’s also the latest step in an effort by Events D.C., which manages the convention center, to boost the city’s profile in the overlapping worlds of creative design, tech and gaming.

Otakon is expecting 20,000 visitors per day during the three-day event, which begins Friday. There are also an expected 4,000 room-nights on peak, and an expected visitor spend of nearly $30 million from the event, according to Events D.C.

Events D.C. hopes the convention will continue to raise D.C.’s profile among a young, creative class, much like its efforts to get involved in esports, or competitive video gaming. The quasi- governmental entity took on a sponsorship of Los Angeles-based NRG Esports back in May, and has been hosting the athletes from several of NRG’s teams in the District for events. Those events have drawn large crowds of enthusiasts and fans of the players, according to CEO Greg O’Dell.

Though D.C. won Otakon’s business back in 2014, since then, the convention has upped its own involvement with the esports side of Japanese culture.

“As we’ve started to focus on esports as a market we’re targeting, the great and fortuitous things that the worlds are further colliding, because part of Otakon’s programming is building and growing the gaming experience,” O’Dell said. Otakon will have several video game tournaments throughout the weekend, including “Super Smash Bros. Melee,” “Street Fighter” and “Mario Kart 8.”

Nongamers will come for the many interviews with artists and animators, workshops on making cosplay costumes, screenings of new films, chances to get autographs from their favorite stars and a big masquerade Saturday night.

Many of those visitors will be dressed to the nines as their favorite anime character, something that provided endless entertainment for our colleagues at the Baltimore Business Journal over the years.

Marina Martins, CEO of D.C.-based animation studio Pigmental LLC, believes the show just furthers D.C.’s reputation as a creative base of operations — something she’s been discovering since opening her business at Gallaudet University in 2016.

“A lot of people coming to the convention will be introduced to D.C.’s potential,” she said. “They’ll discover the architecture, the young music scene, the D.C. they don’t know, and will fall in love with it. I think it’s going to open the joys of the city and the excitement of this city to a whole new audience.”

Sadly, due to a foot injury, Martins herself won’t be making an appearance this year — but many of Pigmental’s animators will, she said.

For the convention center, Otakon means miles of cable running through the building, as well as tons of people using the internet: luckily, Event’s D.C. upgrades the convention center’s Wi-Fi capabilities annually, according to O’Dell. Otakon attendees will be experiencing a much more modern venue in Washington than in Baltimore; D.C.’s convention center opened in 2003, but Baltimore’s dates back to 1979.

Conventions that are more for pleasure than business do prompt Events D.C. to analyze other changes it might want to make to the venue, however. The group is currently planning a lobby redesign and the creation of better social spaces within the center to respond to how people meet and hang out and make those areas more dynamic.

“This is not a traditional meeting where 3,000 people sit in a plenary session,” O’Dell said. “People use the building differently.”

6 Ways To Make DC A City Of The Future